A land surveyor may not be recognized as much as a doctor or a lawyer, but no one can dispute that they play a very crucial role on Earth. 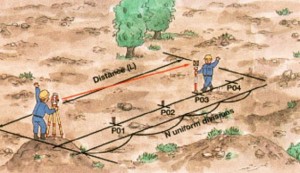 As proof, several countries all over the world have unsettled land disputes over other countries. Some may have been settled through the International Court of Justice, Treaty conditions, or a claimant country’s sovereignty has been recognized. And of course, these were all settled with the help of a land surveyor.

Let’s take a look at some of the famous land disputes all over the world settle by a land surveyor:

A piece of parcel is something that signifies power and resources thus many countries fight over it. If big countries have unsettled disputes over a piece of land, small land disputes also happen between siblings, husband and wife, and neighbors. Though you can’t hire a land surveyor from an International Court to settle your small land disputes, you can always hire a local land surveyor who can survey your property and resolve any encroachment claims and/or equally divide a property as mandated by law.

A land surveyor plays a very vital role in settling land disputes, big or small. If you are in a situation that you may need the expertise of a land surveyor, please contact LaGrange Land Surveying at (706) 407-2722 today or go to our Contact page and send us an email.